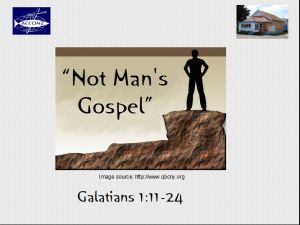 11 For I would have you know, brothers, that the gospel that was preached by me is not man’s gospel. 12 For I did not receive it from any man, nor was I taught it, but I received it through a revelation of Jesus Christ. 13 For you have heard of my former life in Judaism, how I persecuted the church of God violently and tried to destroy it. 14 And I was advancing in Judaism beyond many of my own age among my people, so extremely zealous was I for the traditions of my fathers. 15 But when he who had set me apart before I was born, and who called me by his grace, 16 was pleased to reveal his Son to me, in order that I might preach him among the Gentiles, I did not immediately consult with anyone; 17 nor did I go up to Jerusalem to those who were apostles before me, but I went away into Arabia, and returned again to Damascus. 18 Then after three years I went up to Jerusalem to visit Cephas and remained with him fifteen days. 19 But I saw none of the other apostles except James the Lord’s brother. 20 (In what I am writing to you, before God, I do not lie!) 21 Then I went into the regions of Syria and Cilicia. 22 And I was still unknown in person to the churches of Judea that are in Christ. 23 They only were hearing it said, “He who used to persecute us is now preaching the faith he once tried to destroy.” 24 And they glorified God because of me. 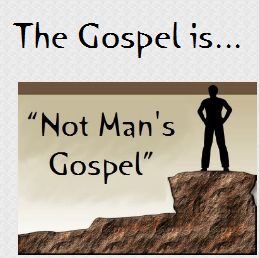 Paul and his team of missionaries had made it their mission to spread the message of the Gospel to the region of Galatia.
We saw that Paul had defined that message as the fact that the Lord Jesus gave himself for our sins (1:4).
We also saw that some people (whom Paul called the troublers) had come into the Galatian churches and tried to substitute a different message. That message was a distorted one, and if the Galatians followed it, they would be deserting the true faith.
This week’s section explains why the true Gospel is “not man’s gospel” and why that is so important. 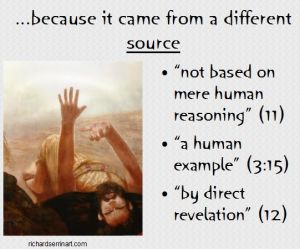 Paul had already said that his missionary calling was not “from men nor through man(1:1). He had also made it clear that no man was his master, because he was not serving man, nor trying to please man (1:10).
Now he is making it clear that his message (the gospel) is not an evolved Judaism. It is not “based on human reasoning” (1:11). He did not follow “a human example” (3:15).
Instead, the message came by direct revelation (1:12). The story of how Christ first revealed himself to Paul is found several times in the book of Acts.

We get a glimpse into the nature of that revelation by studying the theology that Paul presents in his letters to the churches.
Perhaps one of the most revealing texts that show us the content of the revelation that Paul received is Eph. 1:15-23. Here Paul is praying that the Ephesians would receive a revelation as well.
There are two things that Paul prayed for the Ephesians to receive: an awareness of their future destiny (their HOPE); and an awareness of their present possession (God’s POWER available to them).
The gospel message focuses on both of these realities. 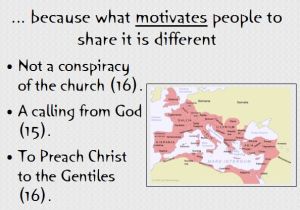 Paul also argues in today’s text that the gospel is not man’s gospel because of what motivates people to share it. Paul used himself as an example. He said that when God first revealed Christ to him, he did not immediately consult with anyone (1:16).
Instead, Paul took a break. He went to Arabia, and meditated for a while. He wanted to make sure that his experience was real, so he gave God time to explain it to him.
By the end of that three year experience Paul was confident that he had been set apart to preach Christ to the Gentiles.

He uses language similar to that used by the prophets of old. They were convinced that God exists, and that he has something to say to his people, and that he brought them into existence specifically for the purpose of saying what God wanted to say.
There were plenty of false prophets around during their time who would say what man wanted to hear. But the true prophets had to be true to their calling.
Jesus commands us to “”Go into all the world and proclaim the gospel to the whole creation” Mark 16:15. That is our calling. 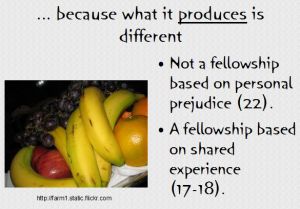 Paul also argues in today’s text that the gospel is not man’s gospel because what it produces is different. It has a different fruit.
The false gospels of this world revolve around who you are, and how you can be different from everyone else. The true gospel says that God has accepted you just as you are.
Once Paul got over who he was and was willing to let Jesus shine through him, he was then allowed to visit the other apostles, and have true fellowship with them.

Gospel fellowship is defined well by this statement, found in Gal. 2:9.

Gospel Fellowship recognizes that God’s grace has apportioned gifts to every believer, and honors each believer’s distinctive calling.

Gospel Fellowship accepts every believer and encourages each to work together to make disciples for Christ. 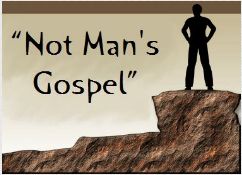 The true Gospel is “not man’s gospel.” It didn’t originate with human tradition. It ignites within us a sense of separation and a holy calling. It results in a fellowship based on acceptance and encouragement.
_____
Heavenly Father,
Help us to escape human traditions long enough to get a clear focus on the gospel message. May our hearts beat to the tune of the good news of what Jesus did for us (that no man could do), the destiny that awaits us (that no man can imagine), and the power that is available to us (that no man can resist).