Galatians 2:1-10 ESV
Then after fourteen years I went up again to Jerusalem with Barnabas, taking Titus along with me. 2 I went up because of a revelation and set before them (though privately before those who seemed influential) the gospel that I proclaim among the Gentiles, in order to make sure I was not running or had not run in vain. 3 But even Titus, who was with me, was not forced to be circumcised, though he was a Greek. 4 Yet because of false brothers secretly brought in- who slipped in to spy out our freedom that we have in Christ Jesus, so that they might bring us into slavery- 5 to them we did not yield in submission even for a moment, so that the truth of the gospel might be preserved for you. 6 And from those who seemed to be influential (what they were makes no difference to me; God shows no partiality)- those, I say, who seemed influential added nothing to me. 7 On the contrary, when they saw that I had been entrusted with the gospel to the uncircumcised, just as Peter had been entrusted with the gospel to the circumcised 8 (for he who worked through Peter for his apostolic ministry to the circumcised worked also through me for mine to the Gentiles), 9 and when James and Cephas and John, who seemed to be pillars, perceived the grace that was given to me, they gave the right hand of fellowship to Barnabas and me, that we should go to the Gentiles and they to the circumcised. 10 Only, they asked us to remember the poor, the very thing I was eager to do.

We have seen how Galatians focuses on the gospel message. In 2:7, Paul says that he has been “entrusted with the gospel.”

The same is true of you and me. We have been entrusted with the gospel message.

The challenge for us is to keep faithfully proclaiming the gospel as Paul did.

The reason Paul could keep proclaiming the gospel is that he was not ashamed of it. He believed that it is God’s power for salvation (Rom. 1:16).

Of course, God does not want us proclaiming his truth if we do not back it up by living right.

Paul tells the Philippians “…let your manner of life be worthy of the gospel of Christ” (Philippians 1:27).

Sometimes the things that we do speak so loudly that people can’t hear the words that we say.

The answer is not to stop proclaiming the gospel, but to proclaim it faithfully. Otherwise we will have been running in vain.

Paul asked the Ephesians to pray for him that “words may be given to (him) in opening (his) mouth boldly to proclaim the mystery of the gospel” (Ephesians 6:19).

If Paul needed that, then surely you and I do as well. In fact, this should be a part of our regular prayers for each others.

Instead of just praying “God bless so and so” let’s pray that God give so and so opportunities to share his faith. 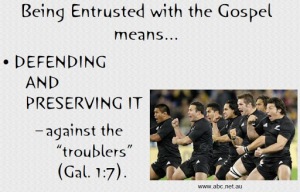 For Paul, being entrusted with the gospel also meant that he had to speak out against the troublers that he had referred to in 1:7.

These troublers were not just people with a different theological point-of-view. They were espousing an entirely different kind of salvation.

We need discernment so that we don’t get hung up on petty theological differences. If we do that, noone will listen when we seek to defend the gospel.

The fact is – there are a lot of people out there who just do not understand the gospel message.

Paul says that “the god of this world {Satan} has blinded the minds of the unbelievers, to keep them from seeing the light of the gospel of the glory of Christ, who is the image of God. ” (2 Corinthians 4:4).

There were some unbelievers in Jerusalem who were more concerned with the fact that Titus was uncircumcised that the fact that he believed in Christ. Paul refused to give in to their blindness because the integrity of the gospel was at stake.

For Paul, being entrusted with the gospel meant that he had to use the methods that worked best to minister the gospel.

In 1 Cor. 9, he argued that he and Barnabus had the right to be paid for their missionary work, but that they waived that right and supported themselves because they would “endure anything rather than put an obstacle in the way of the gospel of Christ.” (1 Corinthians 9:12).

We need to stop and ask ourselves if what we are doing is accoplishing the task that we want done. If it is not, then we need to have the courage to change. Otherwise, our traditions might be keeping people out of the kingdom. 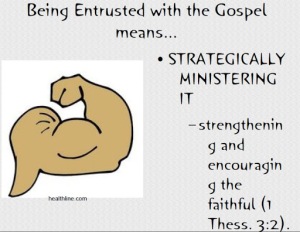 Paul had a strategy. He would plant churches wherever he went, and leave one of the missionaries who were with him to continue establishing those churches, and he would continue to stay in touch by e-mail (that is Epistle-mail).

For example, he told the Thessalonians that he “sent Timothy, our brother and God’s coworker in the gospel of Christ, to establish and exhort you in your faith” (1 Thessalonians 3:2). He had also sent Timothy to Ephesus for the same purpose. My point is that Paul’s strategy worked for spreading the gospel.

When he was encouraging the Ephesians to have an active prayer ministry, he reminded them that they should also be “wearing for shoes on (their) feet the eagerness to spread the gospel of peace” (Eph. 6:15 NJB).

A strategy is only as good as the willingness of all involved to operate according to the strategy. Paul’s method for reaching the Gentiles with the gospel depended on every believer being eager to spread the gospel, not just every missionary or every minister.

Each of us have been entrusted with the gospel.

Each of us has a sphere of influence to whom we have been called to share the gospel.

No one can reach your sphere of influence like you can. Not your pastors, not your elder, …only you.

LORD, give us all the courage to faithfully proclaim the gospel you have entrusted us with. Give us the strength to defend it against attack. Give us the wisdom to minister it with methods that work, because eternal lives are at stake.

One thought on “Entrusted With The Gospel”