Galatians 3:1-9 ESV
O foolish Galatians! Who has bewitched you? It was before your eyes that Jesus Christ was publicly portrayed as crucified. 2 Let me ask you only this: Did you receive the Spirit by works of the law or by hearing with faith?
3 Are you so foolish? Having begun by the Spirit, are you now being perfected by the flesh? 4 Did you suffer so many things in vain- if indeed it was in vain? 5 Does he who supplies the Spirit to you and works miracles among you do so by works of the law, or by hearing with faith-
6 just as Abraham “believed God, and it was counted to him as righteousness”? 7 Know then that it is those of faith who are the sons of Abraham. 8 And the Scripture, foreseeing that God would justify the Gentiles by faith, preached the gospel beforehand to Abraham, saying, “In you shall all the nations be blessed.” 9 So then, those who are of faith are blessed along with Abraham, the man of faith. 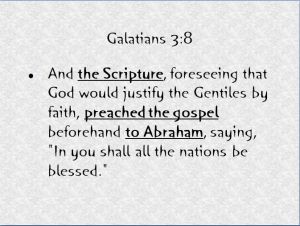 We have been following Paul’s message to the Galatians. So far we have noticed that a key theme to the letter is the Gospel of Salvation by Grace.
In today’s passage we discover that the gospel of which Paul is speaking to the Gentile Galatians was revealed in the Old Testament to Abraham.
Here we see three elements of the New Testament gospel message first revealed to Abraham in the Old Testament.

I draw your attention to what Paul says in verse 1. He makes reference to Christ’s death by crucifixion. Why would he do that in this context?
The death of Jesus Christ was Gods PLAN A for the salvation of humanity. That’s why God revealed this element of the gospel message way back before the law was given through Moses.
He revealed it to Abraham when he commanded him to sacrifice Isaac on Mt. Moriah.

There are several parallels to the crucifixion story here:
1 Abraham was asked to sacrifice his only begotten son.
2 Isaac carried the wood on his back.
3 It was a three day walk to Mt. Moriah (Gen. 22:4).
4 The place where this happened was probably the exact spot where Jesus would be crucified.
5 The ram was provided as a substitute.
6 The place was called “The LORD will provide.” (Gen. 22:14). 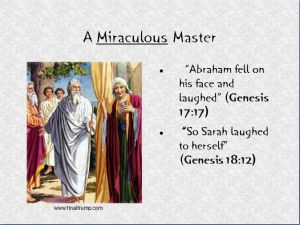 Another Part of Paul’s argument to the Galatians is that God’s supernatural miraculous work in their lives is evidence that they have inherited the covenant with Abraham.
Abraham and Sarah were promised that they would have a son when they were both way past their “use by” date. The Bible records that both of them initially laughed at the idea. 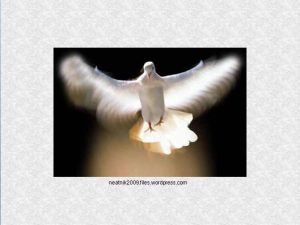 Paul told the Galatians that the same God who brought unbelievable miracles into the lives of Abraham and Sarah also has supplied them with the Holy Spirit, and was working miracles among them.
Later in this chapter he says “Christ redeemed us from the curse of the law by becoming a curse for us- for it is written, “Cursed is everyone who is hanged on a tree”- so that in Christ Jesus the blessing of Abraham might come to the Gentiles, so that we might receive the promised Spirit through faith.” (3:13-14).

Abraham’s story was also a story of forgiveness… yes, I said forgiveness.
God had originally wanted the entire human race to be his representatives – his children. But sin marred God’s creation and made it impossible for any human being to be God’s child because we all lacked the righteousness necessary to represent him.
God in his grace responded to Abraham’s faith and counted it as righteousness. He forgave Abraham on the basis of the shed blood of Christ, his descendant. 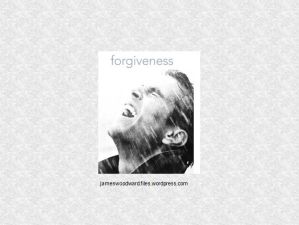 Notice what Paul says about how we are counted children of Abraham:
1) It is through Christ.
Now the promises were made to Abraham and to his offspring. It does not say, “And to offsprings,” referring to many, but referring to one, “And to your offspring,” who is Christ. Galatians 3:16
2) We inherit what God promised Abraham.
For if the inheritance comes by the law, it no longer comes by promise; but God gave it to Abraham by a promise. Galatians 3:18
3) Only those in Christ will inherit what God promised Abraham!
And if you are Christ’s, then you are Abraham’s offspring, heirs according to promise. Galatians 3:29

The author of Hebrews implied that what identified those who had the faith of Abraham was their faith in what God promised him in spite of what their lives were like. They trusted in the One who promised, and died in faith, looking forward to the fulfillment.
The reason Paul brought up Abraham here in his message to the Galatians is that the troublers were trying to get the Galatian Christians to convert to Judaism in order to become heirs of Abraham. But by virtue of their faith in Christ, these Galatians were already heirs with him of all the blessings promised to Abraham.

LORD, help us to trust in you and you alone the way Abraham did.
Help us to trust in you in spite of what happens in this life because we are looking forward to your kingdom to come.
And help us to accept your payment for our sins, your miraculous Holy Spirit and your incredible forgiveness through Christ’s sacrifice.
Help us to hold fast to this gospel, once preached to Abraham, now available to us through Christ. Amen.

One thought on “The Gospel Preached to Abraham Gal. 3 1-9”