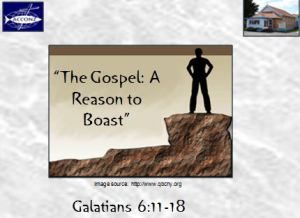 Galatians 6:11-18 ESV
See with what large letters I am writing to you with my own hand. 12 It is those who want to make a good showing in the flesh who would force you to be circumcised, and only in order that they may not be persecuted for the cross of Christ. 13 For even those who are circumcised do not themselves keep the law, but they desire to have you circumcised that they may boast in your flesh. 14 But far be it from me to boast except in the cross of our Lord Jesus Christ, by which the world has been crucified to me, and I to the world. 15 For neither circumcision counts for anything, nor uncircumcision, but a new creation. 16 And as for all who walk by this rule, peace and mercy be upon them, and upon the Israel of God. 17 From now on let no one cause me trouble, for I bear on my body the marks of Jesus. 18 The grace of our Lord Jesus Christ be with your spirit, brothers. Amen.

Our journey through the book of Galatians is coming to an end, and before we examine today’s text I want to do a little reflecting. Why is this letter in scripture? After all, it is letter from a person we have never met – the apostle Paul – to a group of people we have never known – the Galatian believers – in a place we probably will never visit.

God saw fit to make the letter to the Galatians part of canonical scripture. I think one of the reasons is that the Galatians had encountered a belief system that challenged the Gospel of Salvation by Grace that Paul had preached. By responding to that challenge, Paul articulated the Gospel of salvation by Grace. He also showed how easy it is for believers to get sidetracked if we are not careful. 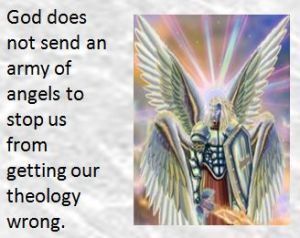 The LORD allows us to learn the principles from his word at our own pace, which is a good thing. But we can also be lulled into a false sense of security. God does not send an army of angels to stop us from reading false teaching in a book, magazine or on the internet. We have the personal responsibility to evaluate what we read, hear and see on a screen. We have to compare it to the truth we have already learned in our walk with Christ.

The Galatians had not done that. The Judaizers from Jerusalem came into the Galatian churches and before long their version of the Gospel was the only one being preached. Because they lacked discernment, they had abandoned the gospel of grace for another gospel, and didn’t even realize it. 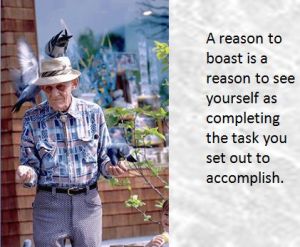 When you see someone doing something, do you ever stop to ask what motivates him to do that. Often a person’s motives for doing something are just as important as what he or she does. Paul concludes his letter to the Galatians by comparing his motivations with the motivations that the Judaizers had in spreading their version of the gospel.

Paul talks about boasting here. He is not talking about prideful boasting. He is comparing motivations. A reason to boast in that context is a reason to see yourself as completing the task you set out to accomplish. Paul is comparing two completely different sets of motivations in these final verses of his letter.

The Judaizers wanted the Galatians to be circumcised. It wasn’t that they wanted to obey God’s command or follow the Abrahamic covenant. Paul points out the wrong motivation behind their religious activity. They wanted to make a good showing. They would argue that appearances matter, and that is true. But if the only reason you want to do something is that it looks good, there’s something wrong. 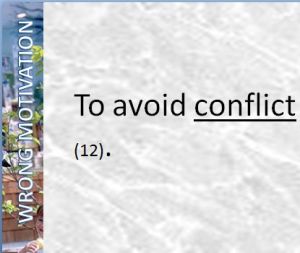 The Judaizers wanted the Galatians to be circumcised because the Jews were actively persecuting converts to Christianity. Paul knew about that because he had been one of the persecutors. Before he came to Christ, he had used fear as a tool to keep people in line. Paul said that the Judaizers were doing what they were doing “in order that they may not be persecuted for the cross of Christ ” (Galatians 6:12).

The Judaizers wanted the Galatians to be circumcised because they wanted to boast in their flesh (13). They wanted to change these pagan Galatians into God-fearing Jews – but their motivation had nothing to do with God. It was human pride. They wanted to make their mark on these Gentiles. What better way than to force them to give up those things that identified them culturally as Gentiles.

The Judaizers did not want to redeem the Galatians, they wanted to alter them They insisted on the Galatians changing their identity. That’s why they only chose those aspects of Judaism that have to do with outward identity: diet, celebrations, circumcision, etc. They wanted to make a difference but it had nothing to do with inner change. 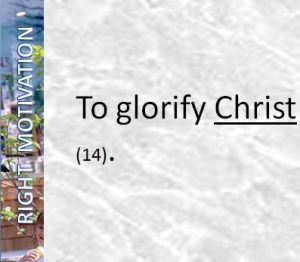 But Paul was motivated by what Christ did for the Galatians on the cross. He said “far be it from me to boast except in the cross of our Lord Jesus Christ, by which the world has been crucified to me, and I to the world” (Galatians 6:14). Paul had not preached to the Galatians because he wanted to change them, he preached to the Galatians because of what Jesus Christ did on the cross. The Gospel is not about how good we can become. It is about how good God is. God’s goodness sent his only begotten Son to the cross to die in our place. God’s goodness and grace as seen on the cross of Calvary leads not to our glorifying ourselves, but to glorifying Christ.

For Paul, “neither circumcision counts for anything, nor uncircumcision, but a new creation” (Galatians 6:15). He was talking about what Jesus said to Nicodemus. He said “unless one is born again he cannot see the kingdom of God” (John 3:3). Unless the change happens on the inside, then all the reforming and following orders you do is useless.

I think that each of us is in danger of replacing our grace theology with some works theology. But Galatians is about more than that. It encourages us to hold on to Christ and what he did as the foundation for who we are. It also encourages us to live the freedom we have in Christ instead of giving into bondage. In Galatia, the bondage was primarily legalism. The bondage you and I may be tempted with could be something else. If we can shake free from the bondage that threatens us, we will have a reason to boast.