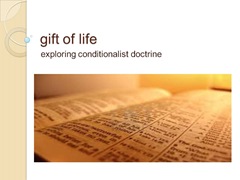 Conditionalists believe that death is a reality because everyone was in Adam when God warned Adam not to eat of the forbidden tree. That includes Eve, since she was part of Adam at the time. That includes you and me, since we were still part of Adam as well. So, everyone, regardless of their spiritual condition will experience this death that God warned Adam about. Just look around at all the cemeteries scattered throughout the planet. You will see that God’s threat was real. Death is a reality for all of us. The good news of the gospel is not that we don’t die. Satan was not right about that, and God was not lying. The good news is that God in his grace offers us hope after death: a resurrection of the whole person to permanent life.

Jesus said: “an hour is coming when all who are in the tombs will hear his voice and come out, those who have done good to the resurrection of life, and those who have done evil to the resurrection of judgment” (John 5:28-29). This resurrection to permanent life is the true hope of the believer, not going to heaven as a disembodied spirit. In fact, Jesus says that if he does not raise you from the dead, you will be lost! He said “Now this is the will of the one who sent me–that I should not lose one person of every one he has given me, but raise them all up at the last day”(John 6:39). This would make no sense whatsoever if believers are already with Jesus in heaven for thousands of years before the resurrection. It only makes sense if believers are dead in their graves awaiting a resurrection when Christ returns.

This also explains why the apostle Paul argued strenuously for a resurrection to the Corinthians. These Corinthians had been exposed to the pagan philosophical notion of the survival of the immortal soul. In explaining the gospel, Paul had to convince them that this notion was wrong. He had to show them that resurrection of the whole person is necessary. This is what Paul says to them: “For if the dead are not raised, not even Christ has been raised. And if Christ has not been raised, your faith is futile and you are still in your sins. Then those also who have fallen asleep in Christ have perished. If in this life only we have hoped in Christ, we are of all people most to be pitied. But in fact Christ has been raised from the dead, the firstfruits of those who have fallen asleep. For as by a man came death, by a man has come also the resurrection of the dead. For as in Adam all die, so also in Christ shall all be made alive. But each in his own order: Christ the firstfruits, then at his coming those who belong to Christ.” (1 Corinthians 15:16-23). Nowhere in Paul’s argument does he concede that death is not real. He argues for the absolute necessity of resurrection. In fact, he says that if there is no resurrection, believing in Christ is useless. If there will be no resurrection, we are all still in our sins. If there will be no resurrection, we are of all people most to be pitied. Why? Because those who die are really dead. They have fallen asleep. They are not alive somewhere up yonder or down there. They are not alive anywhere. The promise of a resurrection makes sense because that is what mortal people need.

Listen to the audio file on Afterlife.