We have been exploring some biblical texts that line up with our vision and mission statement as a church. Here at Takanini Community Church we describe ourselves as “an open family of believers seeking to follow Jesus Christ and live out His teaching while we watch for his return.”

Today’s text helps to clarify what we mean when we talk about living out Christ’s teachings. It is found in Luke’s Gospel, chapter 6 and verses 46-49.

46 “So why do you keep calling me ‘Lord, Lord!’ when you don’t do what I say? 47 I will show you what it’s like when someone comes to me, listens to my teaching, and then follows it. 48 It is like a person building a house who digs deep and lays the foundation on solid rock. When the floodwaters rise and break against the house, it stands firm because it is well built. 49 But anyone who hears and doesn’t obey is like a person who builds a house without a foundation. When the floods sweep down against that house, it will collapse into a heap of ruins.”

In the last text we looked at in this series, we saw what it meant to be a follower of Jesus Christ. We saw four men on a beach being challenged to let Jesus change them into fishers of men. We saw a large crowd bringing all the broken people they could find to Jesus, so that he could heal them.

We can naturally pick up from those images, and see another aspect of the gospel message in today’s text. Reading the larger context, we see that Jesus had prayed all night on a mountain. When he came down to a level place, he then called the twelve whom he was training as missionaries. Joining them was a large crowd of other disciples, and an even larger crowd of people from all over the surrounding regions, and they had brought all the people with something wrong with them for Jesus to fix. So, there were four groups in all, interacting with Jesus: the twelve apostles, the larger group of disciples, the even larger crowds watching, and the people being helped. The message Jesus taught was directed to all four groups. It was a message about being authentic in one’s Christian walk.

Now, consider this: of all the people in all the groups I just mentioned, no one doubted that Jesus was real. They brought crippled people to him, and he healed them. They brought people attacked by demons and after Jesus did his thing, those people left with their lives back under control. Jesus was the evidence of his own genuineness. But, what about the Christians? What was to be the evidence of their authenticity?

Here is where you will find some differences in answers depending on who you ask. Some Christians come from a background that teaches them to expect God to always heal the sick and do other supernatural things as the sign that their faith is real. I do not doubt God’s power to heal at all. Neither do I doubt that the Holy Spirit gifts certain Christians with supernatural healing gifts, or manifests his power through some other kind of miracle. But I’m not one of those Christians who comes from a background where we always expect God to do that. When I look carefully at this text, I see Jesus authenticating who he is by his miracles. But he teaches the apostles and disciples to authenticate who they are some other way. We Christians authenticate ourselves by living out his teaching – by doing what he commanded us to do.

Jesus had noticed that there were many who had professed faith in him, and even owned him as their Lord, but their confession had not produced any obedience. There are some groups that emphasize God’s election so much that it sometimes seems like they are saying what you do does not matter. But what you do does matter. It matters to Jesus. Those he chooses choose to obey him. Simply claiming that Jesus is your Lord puts you in the latter two groups, not in the former two groups. Those in the latter two groups have had some awareness of who Jesus is and what he can do. They may even have had some experience of him. He may have even healed them or delivered them from demons. But simple awareness or even a simple experience is not enough. The question Jesus asked challenged them to seal their commitment by becoming part of group two: the larger group of disciples. He had given a number of commands in his gospel sermons. He expected those who were really sincere about calling him Lord to start obeying those commands.

The message for us today is that professing faith is still not enough. We can say we are Christians all we want. We can even attend Christian services, listen to Christian music, back Christian political candidates, and put a fish sticker on our car’s back bumper. Still not enough. So, what is enough? That’s what Jesus teaches here. A life of obedience demonstrates authentic Christianity.

Jesus describes that life of obedience by comparing our lives to a house built on the solid foundation of a rock. He talks about floodwaters rising and breaking against that house and – nothing happens. In the simile that Jesus is using here, you can tell an authentic Christian life because the trials and troubles which destroy the lives of others cause no destruction in the true Christian’s life. The evidence is … nothing. No cracks, no leaks, no landslides, no roof caving in, no disintegration. The evidence is a lack of negative evidence.

But do not forget the reality that we saw first. Simply professing Christ as your Lord is not the same thing as building your life of the rock. There is only one way to build a Christian life. It is not having good Christian parents. It is not having a good Christian education. It is not learning a solid Christian theology. All of these are good things, but neither is the thing that Jesus identified as building one’s house on a rock. Building my life on the rock is learning and obeying the teachings of Jesus.

The apostles who wrote the epistles of the New Testament picked up on this same building analogy to teach their churches how to live authentically as Christians.

What I find most significant about the way the New Testament epistles read Jesus’ teaching about building our lives is that they all describe the process that Christians do for each other. We’re not used to thinking of it quite like that. I think of building my own life on the rock, and I tend to think of obeying Christ’s teachings personally, remaining pure, not being hypocritical, staying personally devoted to the Bible, etc. But the apostles understood that Jesus actually gave very few commands that his followers can obey individually. In fact, it is in the laboratory of community living that we will find the most challenges to our desire to live out his teachings. So, that is one reason why Christ taught his disciples to form churches. It is in the context of church, family, society where we can build our lives into something stable that will outlast whatever destruction comes our way. 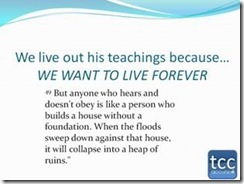 Of course, there is a cosmic, future, ultimate sense in which Jesus’ illustration applies as well. The ultimate challenge that we all face is our own mortality. The ultimate floods that sweep down on the house are age and disease, accident or violence. If the atheists are right, and there is no God, we all just die. But if Jesus was right, and God exists, there is a solution to the death problem. Jesus taught in many different ways that there is hope for a second life, an eternal life. How do we guarantee that we will make it into the right side of the judgment? Answer: the same thing we do to authenticate our Christian profession: living out his teachings.

We have committed ourselves as a church to learning Jesus’ teachings, and applying them to our lives as individuals and as a Christian community. We want to build each other up into a building that will survive the disasters of this life, and make it into the future life. You are invited to join us. We are an open family: there’s always room for more. But if you are serious about joining us, you have to know that we do not compromise the teachings of Jesus. Living out those teachings is the building process itself.

One thought on “We are… seeking to live out his teaching”