We have been exploring the ideas expressed in our church identity statement. We, as a church identify ourselves as “an open family of believers seeking to follow Jesus Christ and live out His teaching while we watch for his return.”

Identity statements like that are important for churches because they summarise ideas which we can band together behind. They also serve to help us decide the kinds of things we as a church should be doing, and what kinds of things we do not have to do.

I particularly appreciate the last phrase in our identity statement because it shows our expectation of what the scripture calls the blessed hope – the second coming of Jesus Christ.

Here is the day’s text:

3 Grace to you and peace from God our Father and the Lord Jesus Christ. 4 I give thanks to my God always for you because of the grace of God that has been given you in Christ Jesus, 5 for in every way you have been enriched in him, in speech and knowledge of every kind– 6 just as the testimony of Christ has been strengthened among you– 7 so that you are not lacking in any spiritual gift as you wait for the revealing of our Lord Jesus Christ. 8 He will also strengthen you to the end, so that you may be blameless on the day of our Lord Jesus Christ. 9 God is faithful; by him you were called into the fellowship of his Son, Jesus Christ our Lord (1 Corinthians 1:3-9).

I had a number of texts to choose from, because the New Testament has a lot to say about the promise of Christ’s return. But I chose this text, because it is one which is probably not used very much, but it definitely relates to the topic.

When we preach about the second coming, there are about five “usual suspects” that we round up.

The story of the ten bridesmaids is a helpful passage, because it shows that some people who think they are ready are not ready. It is a call to be authentic, and to be really prepared, not just to look prepared. You may recall that in the story all ten bridesmaids expected to be invited to the wedding, but five were not really prepared for the long wait before the bridegroom came.

I also like the warning that Jesus gave us when he described his second coming as a trap. He said “34 But be on your guard so that your hearts are not weighed down with dissipation and drunkenness and the worries of this life, and that day close down upon you suddenly like a trap. 35 For it will overtake all who live on the face of the whole earth. 36 But stay alert at all times, praying that you may have strength to escape all these things that must happen, and to stand before the Son of Man.” Luke 21:34-36 NET.

He also described his second coming like a burglar who comes at night. Back in Jesus’ day, people would bring their valuables (including their animals) into their homes at night. They would sleep up in a loft, or on the roof of their houses. Burglars would wait until the wee hours of the morning, burst into the homes and make off with the loot. Jesus used the story to express the same kind of warning as the previous passage: Don’t get caught unprepared for the second coming.

Another favourite passage for preaching about the return is the Olivet Discourse, also called the eschatological discourse, where Jesus answers three questions about his return. One of the questions that his disciples asked was how long it would be until the end of the age. Jesus told his disciples that a number of signs would occur over and over again, like contractions in a birth. His point was that those signs are not proof that his coming was soon, because the signs would keep coming over and over, like contractions during labour.

There was another set of signs that Jesus gave during the same discourse. These signs identified a more immediate group of events, particularly identifying the date of the return. So, while Jesus did say that no one would ever know the day or the hour, we would always be able to identify the season when Jesus could return. It would be just as obvious as when a fig tree spouts all its leaves. Anyone looking at world events today can clearly see that the season is right for Jesus’ return.

But I want us to focus today on the 1 Corinthians text today because it shows that there are some other reasons why believers should be watching for Christ’s return. Firstly, it talks about our being called into fellowship with Jesus. Now, what exactly does that mean?

In Tolkien’s The Fellowship of the Ring, a group of people were called together into a fellowship for the purpose of destroying a powerful ring. In spite of the differences in the people, it was the singular purpose of the fellowship that united them.

But there is something even more significant here. Paul is saying that every born-again believer is called into fellowship with Jesus Christ. We are called to be where Jesus is. But that does not happen yet. We are bound on this planet, and Jesus is with his Father in heaven. That poses a severe problem for fellowship. Some have suggested that when believers die, they go to be with the Lord in heaven. That would be a solution to the problem. But that is not the solution that the apostle Paul gave. He taught that Jesus is going to come back to earth – literally and physically. Then we can be a fellowship again.

His point in today’s text is that we are promised a permanent fellowship with Christ. So, he has to come back to fulfil that promise. 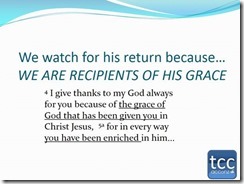 Let me put it this way. Suppose (and I’m really going out on a limb here) I had invested a million dollars in a company. Do you think I would just walk away from that company, and let its leaders do whatever they want with the money I invested? Of course not. I would be making a nuisance of myself, always wanting to be involved in the company’s business because I am so heavily invested in the company. The future of the company would be my business.

Now, God has invested the life of his only Son in us. He has also given us the Holy Spirit who reveals his truth to us and empowers us for ministry. He’s not going to drop everything and go off and play in a distant galaxy for eternity. Jesus is coming back, and we know that because of what he has already done for us.

This is how Paul described this reality to the Ephesian Christians: “For he chose us in Christ before the foundation of the world that we may be holy and unblemished in his sight in love. 5 He did this by predestining us to adoption as his sons through Jesus Christ, according to the pleasure of his will– 6 to the praise of the glory of his grace that he has freely bestowed on us in his dearly loved Son. 7 In him we have redemption through his blood, the forgiveness of our trespasses, according to the riches of his grace 8 that he lavished on us in all wisdom and insight. 9 He did this when he revealed to us the secret of his will, according to his good pleasure that he set forth in Christ, 10 toward the administration of the fullness of the times, to head up all things in Christ–the things in heaven and the things on earth. 11 In Christ we too have been claimed as God’s own possession, since we were predestined according to the one purpose of him who accomplishes all things according to the counsel of his will.” Ephesians 1:4-11.

God had a purpose in mind when he called us to himself, and that purpose will not be fulfilled until Jesus returns. 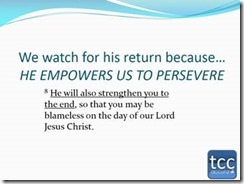 And finally, we can expect that investment by God to continue throughout our entire lives. The strength to persevere through the trials of life and keep proclaiming his word in spite of those trials will stay with us until Jesus returns. 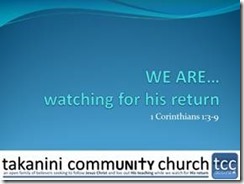 Are you watching for Christ’s return every day of your life? I think we often forget about the fact that his coming is coming. It is no wonder that sometimes we feel powerless to keep going. It is that blessed hope, that expectation of the return which can motivate our perseverance like nothing else.

LORD, help us to fix our eyes on Jesus, so that no matter how hard the race, we can run well, and finish well.

Listen to the audio at Takanini Community Church.

One thought on “WE ARE … watching for his return”