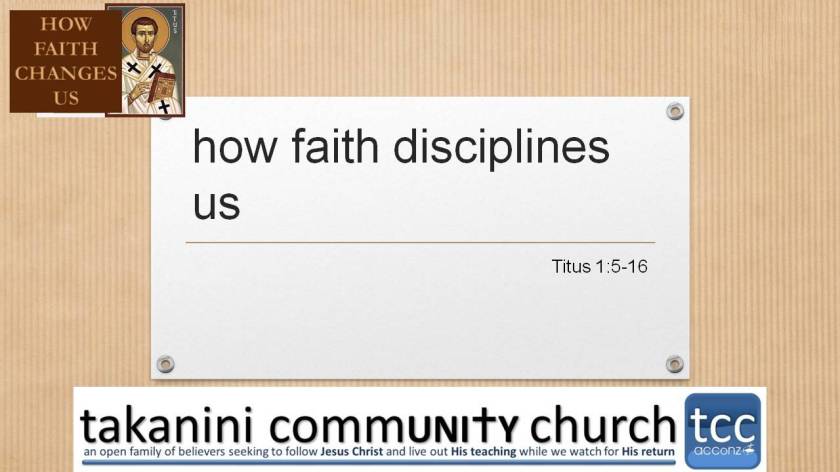 This sermon series is based on Paul’s letter to Titus. Paul was writing as a missionary who was overseeing the churches in Crete. He wrote to Titus, because Titus was the missionary Paul had left in Crete to finish the work of establishing the church groups there. The whole idea of establishing and perfecting a church work suggests that our faith is supposed to change us. I wanted to use the letter to Titus as a model to talk about how being people of faith should change us.

Today we are going to look at a section of the letter which describes what Titus was responsible to do.

5 This is why I left you in Crete, so that you might put what remained into order, and appoint elders in every town as I directed you- 6 if anyone is above reproach, the husband of one wife, and his children are believers and not open to the charge of debauchery or insubordination. 7 For an overseer, as God’s steward, must be above reproach. He must not be arrogant or quick-tempered or a drunkard or violent or greedy for gain, 8 but hospitable, a lover of good, self-controlled, upright, holy, and disciplined. 9 He must hold firm to the trustworthy word as taught, so that he may be able to give instruction in sound doctrine and also to rebuke those who contradict it. 10 For there are many who are insubordinate, empty talkers and deceivers, especially those of the circumcision party. 11 They must be silenced, since they are upsetting whole families by teaching for shameful gain what they ought not to teach. 12 One of the Cretans, a prophet of their own, said, “Cretans are always liars, evil beasts, lazy gluttons.” 13 This testimony is true. Therefore rebuke them sharply, that they may be sound in the faith, 14 not devoting themselves to Jewish myths and the commands of people who turn away from the truth. 15 To the pure, all things are pure, but to the defiled and unbelieving, nothing is pure; but both their minds and their consciences are defiled. 16 They profess to know God, but they deny him by their works. They are detestable, disobedient, unfit for any good work.

Titus was not a local pastor hired by the believers in Crete to preach sermons and manage their church’s ministries. He was a missionary, appointed by Paul, and under Paul’s direction. In verse five, we see what Paul had left Titus in Crete for.

…so that you might put what remained into order,

and appoint elders in every town …(5).

Titus had two basic functions as a missionary. He was responsible to straighten out the things in the churches which were disorderly, and dysfunctional. He was also responsible to develop leaders who would lead the church groups which were being formed in every town. As the gospel spread throughout the island, more and more groups were being formed, and these groups were going to need local leadership. Titus was not responsible to preach every message, and lead every group. If Titus did his job well, he would make himself redundant.

There are a lot of good studies of the qualification lists for elders like we see here in Titus and also in Paul’s letters to Timothy. I wrote one myself and used it to train pastors in the Philippines. There is another recent one written by my friend Geoff Paynter who lives on the South Island. He wrote his to train church elders in Africa. Usually these studies focus on the moral qualities and leadership skills needed to lead churches and serve in church ministries. The lists do focus on those moral qualities and leader skills. But notice what Paul said was the function of these elders once appointed to lead church groups:

… so that he may be able to give instruction in sound doctrine,

and also to rebuke those who contradict it. (9).

Paul’s primary concern was not that Titus pick out some good moral people with good leadership skills, and just turn the church over to them. No, Paul had planted the church in Crete by bringing people the gospel message. Paul wanted to protect the gospel from being replaced by some other teaching. Paul was confident that if a church keeps preaching the gospel of Christ crucified, then it would stay strong and keep leading people to Christ. But Paul was also aware that something else could happen at Crete. The wrong doctrine preached could lead to the wrong kind of elders being appointed.

That brings me back to the title of today’s message: “how faith disciplines us.” Paul expected Titus to find and train and appoint elders to take over the leadership of all the new groups being formed on Crete. Where did he expect to get those true elders from? There was no bible college or seminary on Crete. He had no denominational recruiter with a list of vetted ministry professionals from which he could pick his choices. No, Paul expected the church itself to produce its own leaders. By focusing on preaching the gospel of God’s grace demonstrated by Christ crucified, a church should automatically produce next generation’s leaders. I’m not saying that there is no need for intensive training. But I am saying we should stop using these qualification lists as disqualification lists. Look in your heart. Is your faith genuine? If your faith is genuine, you have what you need to lead someone else to genuine faith. Let that genuine faith discipline you into the kind of person you should be, then dare to lead others into that same kind of genuine faith!