Discipling with a mother’s touch

1 For you yourselves know, brethren, that our coming to you was not in vain, 2 but after we had already suffered and been mistreated in Philippi, as you know, we had the boldness in our God to speak to you the gospel of God amid much opposition. 3 For our exhortation does not come from error or impurity or by way of deceit;

4 but just as we have been approved by God to be entrusted with the gospel, so we speak, not as pleasing men, but God who examines our hearts. 5 For we never came with flattering speech, as you know, nor with a pretext for greed–God is witness– 6 nor did we seek glory from men, either from you or from others, even though as apostles of Christ we might have asserted our authority. 7 But we proved to be gentle among you, as a nursing mother tenderly cares for her own children. 8 Having so fond an affection for you, we were well-pleased to impart to you not only the gospel of God but also our own lives, because you had become very dear to us. 9 For you recall, brethren, our labor and hardship, how working night and day so as not to be a burden to any of you, we proclaimed to you the gospel of God.

One of the foundational objectives of all Christians is to make disciples. Jesus commanded that we all take on this responsibility, and so we must ask ourselves what we are doing to make disciples of all nations every day.  But the Bible also gives us examples and instructions on how to disciple. Today we look at one of the passages where the apostle Paul describes his discipling ministry. In this passage, Paul told the Thessalonians that his missionary team discipled them with a mother’s touch. Let’s examine what he said more closely.

A mother boldly loves her children despite the pain and hardship her investment costs her (1-2). 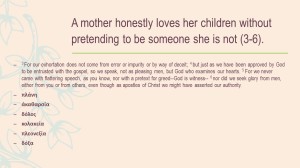 A mother honestly loves her children without pretending to be someone she is not (3-6).

A mother tenderly loves her children, knowing that they need a gentle touch (7). 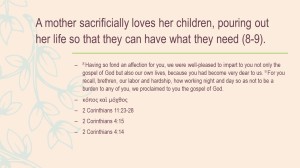 A mother sacrificially loves her children, pouring out her life so that they can have what they need (8-9).

The New Testament mentions a few mothers who were also exceptional disciplers:

These ladies had what it takes to influence their children to commit their lives to Christ. We need disciplers like that.

We, the church of Jesus Christ, are called to make disciples, wherever we go, whatever we do. We can learn much about discipling by looking at a mother’s love, and caring for others with a mother’s touch.