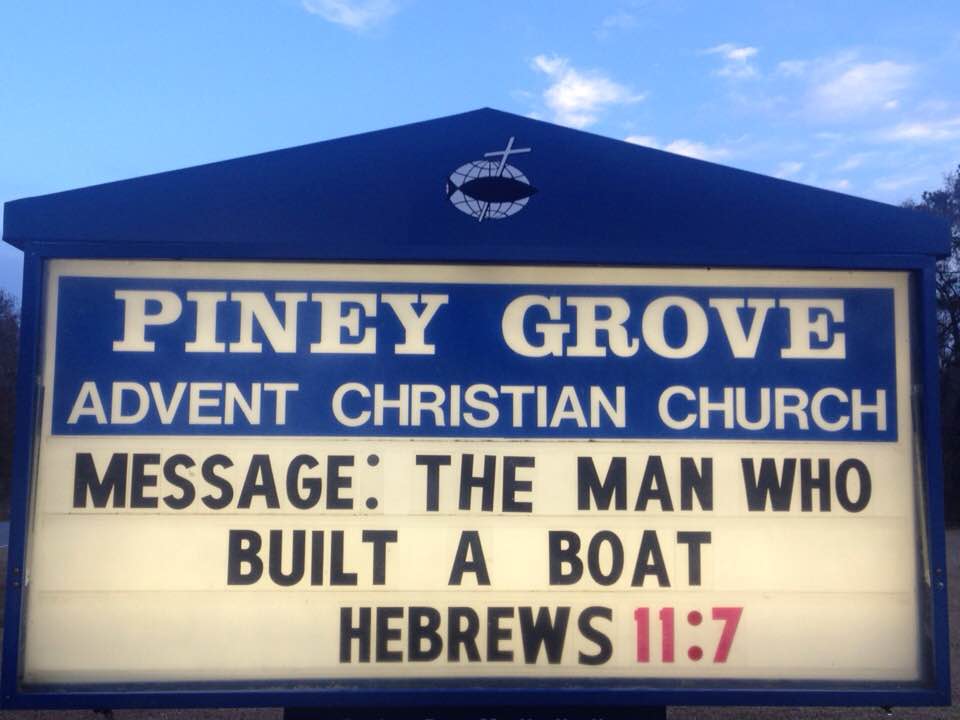 THE MAN WHO BUILT A BOAT

“By faith Noah, after he was warned about what was not yet seen and motivated by godly fear, built an ark to deliver his family. By faith he condemned the world and became an heir of the righteousness that comes by faith” (Hebrews 11:7 CSB).

Our investigation into the heroes of faith as outlined in Hebrews 11 has only just begun. So far, we have looked at the man Abel, who had only one shot at demonstrating his faith, and did not throw away his one shot.

Today’s hero is another example. His story is told in four chapters in Genesis, but it is summarized here with only one verse. But that one verse is jam packed with information. Let’s read it again, and this time notice the words that I underline.

“By faith Noah, after he was warned about what was not yet seen and motivated by godly fear, built an ark to deliver his family. By faith he condemned the world and became an heir of the righteousness that comes by faith.

One verse, but the words BY FAITH are included in it three times.

Outside of the book of Hebrews, the New Testament tells us that …

So, you see how essential faith is for the Christian. But the apostle James warns us that “faith without works is dead” (James 2:26). Noah is a good example of that. Noah put his faith to work by building a boat. It was a big boat. It had to be. God’s plan for Noah was a big plan. He planned to rescue Noah and his family and families of all the animals from the coming flood.

What the author of Hebrews wanted us to know about Noah is the role his faith had in his life. By looking at how faith worked for Noah, we can get instruction on how God intends for faith to work for us.

Noah’s faith helped him to respond appropriately to his fear.

“I have decided to put an end to every creature, for the earth is filled with wickedness because of them; therefore I am going to destroy them along with the earth” (Genesis 6:13).

I don’t know how long Noah had to wait for God to say the rest of what he had to say. I can imagine Noah standing there, looking up into the sky, holding his breath. He’s thinking “every creature? That includes me and mine! The earth – that’s where I live!”

God motivated Noah by godly fear. Friends, fear was not the opposite of faith for Noah. If Noah had not had faith in God, he would not have been afraid of the coming flood. His generation had taught themselves not to fear, and that lack of fear led to their destruction.

We do not have to fear God himself, but we would be fools not to fear his wrath. His coming wrath is real, and that is a wake-up call for us. The axe is already laid at the tree trunks, folks.

Noah’s response was that he “built an ark to deliver his family.” He built it by faith. Nobody had built such a thing before. There was no precedent. There hadn’t been any need before. God himself had to give Noah the blueprint for the thing. Building the ark was something that was going to be very hard to do, and it was going to take a lot of effort and resources to do it.

But … and this is very important… it could be done. God sometimes calls you and me to do the impossible, but most of the time he just calls us to do the impractical, to test our resolve and commitment to him. God didn’t call Noah to build a spaceship. A boat was what was needed, and Noah could do that. Noah’s faith helped him to respond appropriately to his fear and build that boat.

Noah’s faith demonstrated the difference between him and his environment.
Our text says that Noah “condemned the world.” He stood out like a sore thumb. He was an island of integrity in a sea of corruption.

In Job’s day, Satan came to the Lord gloating. God asked Satan where he’s been, and he said that he had been roaming through the earth and walking around on it. He said that as if to imply that the whole planet and all its inhabitants were under his power. Then God asked Satan “Have you considered My servant Job? No one else on earth is like him, a man of perfect integrity, who fears God and turns away from evil” (Job 1:8). Satan thought “He had to go mention Job, didn’t he?

Noah was like Job in his day. He was a righteous man, blameless among his contemporaries, and he walked with God like his Great-Grandfather Enoch did. The man was different, and his faith demonstrated the difference.

When his generation had it as their goal the enjoyment of life, Noah had it as his goal to protect life. As such, he condemned the world of selfishness.

When his generation had it as their goal to ignore God, Noah had it as his goal to obey God. As such, he condemned the world of godlessness.

When his generation was insensitive to God’s purposes, Noah was sensitive to them. As such, he condemned the world of carelessness.

Jesus is calling you and me to be the light of the world. But we cannot be the world’s light if we choose to blend in with the world’s darkness. We need to follow Noah’s example and stand out from the crowd.

Noah’s faith gave him an eternal inheritance.
Now, the story of Noah’s faith does not end when the waters settle and he comes out of the boat. God establishes a covenant with Noah. And the author of Hebrews lists Noah as one who “became an heir of the righteousness that comes by faith.” His faith did more that just rescue him and his family from the flood. The Old Testament says that “Noah’s life lasted 950 years; then he died” (Genesis 9:29). But the author of Hebrews lists him among the heroes of faith that “had not received the things that were promised. But they saw them from a distance, greeted them, and confessed that they were foreigners and temporary residents on the earth” (Hebrews 11:13).

Our permanent inheritance is the city that God has prepared for us. We are all waiting for that city. God is not ashamed to be called our God because he has prepared a city for us (Hebrews 11:16).

That holy city is our inheritance. We share that inheritance with the great heroes of faith like Noah. It will descend from the sky. John saw a vision of that city descending (Revelation 21:2, 10). It is our destiny.

But it is not our present possession. We are in a waiting period, just like everybody else. The thing that distinguishes people of faith from the world is that we know what we are waiting for.

Jesus said “in those days before the flood they were eating and drinking, marrying and giving in marriage, until the day Noah boarded the ark. They didn’t know until the flood came and swept them all away. This is the way the coming of the Son of Man will be” (Matthew 24:38-39).