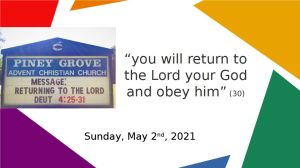 RETURNING TO THE LORD

The Christian life begins at a point in time and history that we call conversion. At the moment of our conversion, a new life begins. That new life is evidenced by two changes. One change is called repentance. Repentance is turning from our former life of sin to God’s righteousness. The other change is faith. Faith is believing in Christ and trusting in him.

At no point in the Christian life is it okay for us to stop having faith. Faith is an expected constant. We should develop the habit of believing and trusting Jesus in everything.

Repentance is also something that we cannot do just once. The Christian life should be one of constant repentance. We should keep examining our lives, attitudes and motives, and be willing to change whenever we find the need. Repentance is one choice which will lead to many choices. It is the turning of our ships in the direction of our intended destination, and it will also require many other smaller course corrections as the journey progresses.

From the day we surrender our lives to Christ, we need to keep practicing repentance. The series I am beginning today is going to focus on the kinds of things we have to keep working at. They are the habits of the victorious Christian.

Paul told the Philippians to keep on doing all they had learned from him (Philippians 4:9). There are some things we cannot just acknowledge. We have to put them into practice. We have to turn them into habits.

Today’s text talks about the habit of returning to the LORD.

These are the words of Moses, who has been told that he would not accompany the Israelites into the promised land. But he was given time to encourage the Israelites to follow God. He does that in the book of Deuteronomy.

Moses told the Israelites that even though they had determined to follow God, they could still fail him (25).

He said they were going to get into the promised land, be in that land a long time, have children and have grandchildren. But he warned them that as they lived their lives they would be tempted to do things that would anger their God. He summarized those things with these words:

• if you act corruptly, make an idol in the form of anything, and do what is evil in the sight of the Lord your God…

Moses had already written down God’s law to fill in all the details of that summary, and he would also provide the book of Deuteronomy as a second reading, so the Israelites would know exactly what God expected of his covenant citizens.

The New Testament teaches this truth in the epistles. The epistles were all written to Christian workers, Christian congregations, and Christian leaders. Yet over and over again the epistles reveal problems that are the direct result of the sins and failures of those people. One of the reasons for the epistles is to provide guidance for Christians who want to correct their failures and return to a right relationship with the Lord.

Moses told the Israelites that there would be consequences of their failure to obey God (26b-28).

Listen again to this revelation:

• “you will quickly perish from the land you are about to cross the Jordan to possess. You will not live long there, but you will certainly be destroyed. The Lord will scatter you among the peoples, and you will be reduced to a few survivors among the nations where the Lord your God will drive you. There you will worship man-made gods of wood and stone, which cannot see, hear, eat, or smell.”

Let’s talk about the consequences that are revealed here.

First, there is the loss of life. If the Israelites failed to obey God’s law, he would take away his protection from them and allow them to lose battles, and to die from diseases, and to turn on each other and take each others’ life. His promise to his own people is that if they rebelled against him, they would not live long in the promised land, but “will certainly be destroyed.”

Secondly, there is the loss of unity. If the Israelites did not obey the covenant in that place, they would be scattered to other places “among the peoples” – that is, the Gentiles. God’s will was for them to know the joy of a community dedicated to him. But if the Israelites refused to obey God, he would send them to other places where they could not experience that community.

Thirdly, there is the loss of importance. God’s will was to manifest his greatness by multiplying the nation which he brought to the promised land. They were to be the most important people on the face of the earth – God’s own. But if those people rebel against his covenant, he would drive them to other nations and reduce them to a few survivors there. When your numbers are reduced, you become less important. When you are few in number, the kings of those foreign nations don’t feel obligated to protect you. When you are reduced to a minority, your civil rights can be trampled on. That’s not fair, but that is the way it is.

Finally, there is the loss of identity. God’s will was that the Israelites demonstrate their uniqueness. They were to be a unique people in their relationship with God. Note how that is expressed in these scriptures:

• Exodus 19:5 “Now if you will carefully listen to me and keep my covenant, you will be my own possession out of all the peoples, although the whole earth is mine”

• Deuteronomy 14:2 “for you are a holy people belonging to the Lord your God. The Lord has chosen you to be his own possession out of all the peoples on the face of the earth.”

• Deuteronomy 26:18 “And today the Lord has affirmed that you are his own possession as he promised you…”

• Psalm 135:4 “For the Lord has chosen Jacob for himself, Israel as his treasured possession.”

Moses tells the Israelites that some of their descendants are going to be so corrupted by the nations they are scattered in, that they will be idol worshipers just like the pagans. I can imagine the gasps of horror when those words were read in the assembly. The people would think “we could never do such a thing.” But then they would remember the golden calf. They would understand that they are capable of becoming just like the world around them.

There are severe consequences for the person who claims to know God and yet chooses to disobey him.

But there is good news in this text as well.

Moses told the Israelites that even when all these things happened to them, they could still return to the LORD (29-30).

Moses invites the Israelites to imagine being exiles in a foreign land – victims of death, destruction, scattering, reduced to a minority of unimportant people discriminated against, turned into pagan idol worshipers – as far away from God and his will as is possible. Then hes says:

• “But from there, you will search for the Lord your God, and you will find him when you seek him with all your heart and all your soul. When you are in distress and all these things have happened to you, in the future you will return to the Lord your God and obey him.”

They could still return to the Lord.

Like the prodigal son – feeding pigs in a foreign land and longing to eat the slop. But the prodigal son became the wise son. He came to his senses and said “‘How many of my father’s hired workers have more than enough food, and here I am dying of hunger! I’ll get up, go to my father, and say to him, ‘Father, I have sinned against heaven and in your sight’” (Luke 15:17b-18).

God’s glorious gospel declares that no matter how far down the road you have gone, it is not too late to turn back.

In fact, Moses tells the Israelites that they are going to get to such a point that they realize (like the prodigal son did in the parable) that there was nowhere else to go. Moses told them not that they could return – not that they might return, but that they would return.

How could Moses be so confident that the Israelites would eventually turn back to God?

Moses grounded his confidence in the faithfulness and compassion of God himself (31).

He told the Israelites that God “will not leave you, destroy you, or forget the covenant with your ancestors that he swore to them by oath, because the Lord your God is a compassionate God.”

When the prodigal returned, he was met by a loving father who ran to him, threw his arms around him and kissed him. He welcomed him back with a celebration because even though the son had done wrong, his father still loved him dearly.

That is our God. That is a God who does not look down on us and seek to condemn us, but runs up to us and rescues us in love. The LORD our God is a compassionate God.

If you have sinned against God and heaven, I don’t have to warn you about the consequences of that choice. You are already feeling those consequences.

What I need to tell you is that the God that you have sinned against loves you and he wants you back. You have damaged your relationship with him but he wants to restore it. You have brought suffering on yourself that you did not have to endure, but he wants to heal you.