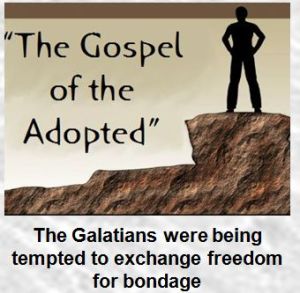 I mean that the heir, as long as he is a child, is no different from a slave, though he is the owner of everything, 2 but he is under guardians and managers until the date set by his father. 3 In the same way we also, when we were children, were enslaved to the elementary principles of the world. 4 But when the fullness of time had come, God sent forth his Son, born of woman, born under the law, 5 to redeem those who were under the law, so that we might receive adoption as sons. 6 And because you are sons, God has sent the Spirit of his Son into our hearts, crying, “Abba! Father!” 7 So you are no longer a slave, but a son, and if a son, then an heir through God.

We have been studying the book of Galatians for the past several months. The churches in the Galatian region consisted mostly of new Gentile believers. The churches traced their origin to Paul’s evangelistic ministry, but they had been under their own control for some years. Some “troublers” had come to the region, preaching that Gentile Christians need to follow the Mosaic law and Jewish traditions. Paul’s letter to the Galatians is his attempt to undo the damage that those troublers had done.

Last month we looked at chapter 3, in which Paul explained that Gentiles who put their faith in Christ receive the same promise that Abraham did, are redeemed by the same blood of Christ, and have responded correctly to the same Gospel message.

Paul continues in chapter 4 to show the Galatians that they do not need to turn to the law to be recipients of Abraham’s blessing. In today’s text, he uses the metaphor of adoption to get that point across.

Verse 6 begins with the words “And because you are sons.” By that Paul is saying that the Gentile believers who have put their faith in Christ are already sons of God. Being a son of God means that you have been forgiven, and that you now represent God as a member of his family, and that you will inherit the blessing he has promised.

Paul had told the Galatians “for in Christ Jesus you are all sons of God, through faith.” He had told the Romans something similar:
Romans 8:19, 23 For the creation waits with eager longing for the revealing of the sons of God. 23 And not only the creation, but we ourselves, who have the firstfruits of the Spirit, groan inwardly as we wait eagerly for adoption as sons, the redemption of our bodies.

So one of the outcomes of our being adopted now is that when Jesus comes we will be a part of his restored creation. We will be immortal and glorious.

But the important message for the Galatians was that the adoption has already taken place. It is not something that we have to wait for, and it is certainly not something that we have to work for. The only work that needed to be done to make us sons of God was the work of Christ on the cross. And that is a finished work. Jesus said on the cross “it is finished.” Because of what he did then, we are sons of God now.

Note that Christ was sent, and redeemed us “so that we might receive adoption as sons ” (vs. 5).

But this is the point that Paul is making relating to the problem the troublers have caused: Believing Jews were also adopted into the family of God on the same basis: faith in Christ.

In verse 3, look at the words “we also.” Who are the “we” that Paul is talking about? The answer is in verse 5: “those who were under the law.” In verse 4 he said that Christ was “born under the law.” We have already seen in Gal. 3 that the law became a curse for all those who tried to keep it in their own strength, but couldn’t. 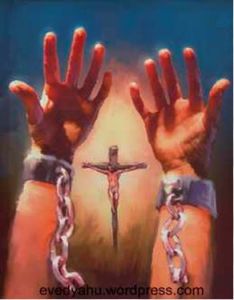 So Gal. 4:1-5 is autobiographical. In it, Paul is saying that he (along with a whole bunch of other Jews) had been enslaved by the law. He was trying to use the law to become righteous like God, and it wasn’t working. The “elementary principles of the world” (I believe these are demons) used the law to keep him in bondage.
Then Paul met Christ. Paul realized that Christ fulfilled the law, and believing in Christ is what would make him righteous. Finally he was free!

Here was the problem for the Galatians. They started out in bondage. They were under the power of demons who pretended to be gods. When they responded to the Gospel that Paul preached, they were freed from that bondage, and adopted as sons of God. But the troublers came, introducing another type of bondage. Because they wanted to please God, they were being tempted to exchange their freedom for that bondage. But Paul told them that the good news stays good news. God did not trick them into a new kind of slavery.

Instead, being adopted into the family of God takes away your burdens, and substitutes benefits.

The first benefit is redemption. Paul says “you are no longer a slave (7).” Gentiles are redeemed by the same blood of Christ that redeemed believing Jews (5).

The second benefit is relationship. The Holy Spirit within us enables us to cry out to God (6), and the blood of Christ, having cleansed us, enables God to hear us, because it has reestablished redeemed humanity to the status of sons of God.

The third benefit is reward. We are now heirs. We will inherit the kingdom of God, immortality and will keep our status as sons throughout eternity. 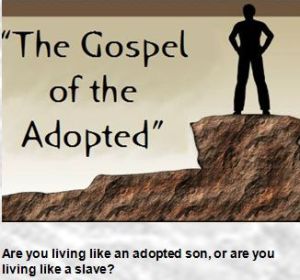 The questions that Galatians asks of us are the same ones that Paul asked of the Galatians. Since you responded to the Gospel and received his salvation by faith, have you changed your mind. Since you surrendered the reins of your life to God’s grace, have you taken them back again? At some point have you decided “I can obey the ten commandments,” “I can read my bible,” “I can pray,” “I can give my offerings.” 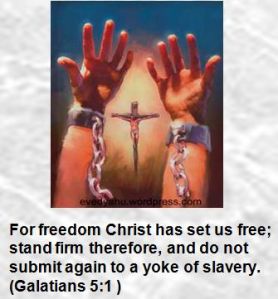 So Paul told the Galatians that Christ did not set us free for us to fall back into bondage, even the bondage that the troublers were offering. When we do the right things in order to be saved, we are turning against the Gospel of grace. We are putting our trust in our own works, rather than the finished work of Christ. So Paul encouraged the Galatians to stand firm, and do not submit again to a yoke of slavery. The same is true of us. Our actions should result from our relationship with God, empowered by his Holy Spirit.

HEAVENLY FATHER, help us to stand firm in our faith in Christ alone.
Help us to walk in freedom as the adopted sons that we are.
May our lives give you glory because they manifest love, joy, peace, patience, kindness, goodness, faithfulness, gentleness, and self-control that comes from freedom.