Galatians 4:8-20 ESV
Formerly, when you did not know God, you were enslaved to those that by nature are not gods. 9 But now that you have come to know God, or rather to be known by God, how can you turn back again to the weak and worthless elementary principles of the world, whose slaves you want to be once more? 10 You observe days and months and seasons and years! 11 I am afraid I may have labored over you in vain. 12 Brothers, I entreat you, become as I am, for I also have become as you are. You did me no wrong. 13 You know it was because of a bodily ailment that I preached the gospel to you at first, 14 and though my condition was a trial to you, you did not scorn or despise me, but received me as an angel of God, as Christ Jesus. 15 What then has become of the blessing you felt? For I testify to you that, if possible, you would have gouged out your eyes and given them to me. 16 Have I then become your enemy by telling you the truth? 17 They make much of you, but for no good purpose. They want to shut you out, that you may make much of them. 18 It is always good to be made much of for a good purpose, and not only when I am present with you, 19 my little children, for whom I am again in the anguish of childbirth until Christ is formed in you! 20 I wish I could be present with you now and change my tone, for I am perplexed about you. 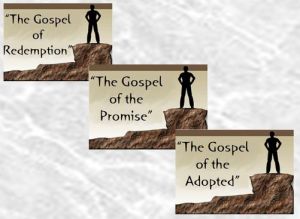 We have been studying Paul’s epistle to the Galatians. We have seen that the Galatians had been deceived by some false teachers. They were being tempted to identify themselves with Jewish traditions, with the assumption that in so doing they might enjoy God’s favour and the blessings associated with Abraham.

Paul has been arguing that going to Judaism is going backwards, not forwards.

In 3:10-14 he argued that Gentile Christians are already redeemed by what Christ did.

In 3:15-29 he argued that Gentile Christians are already recipients of God’s promise to Abraham.

In 4:1-7 he argued that all Christians are adopted equally into the family of God. 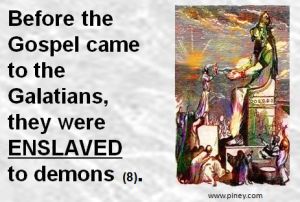 In today’s text Paul goes back to what the Galatians were like before they heard the gospel. He says that they were all enslaved to demons. The Galatians did not need proof of the existence of demons. They had been under demonic bondage until they found freedom by responding to the gospel in faith.

In this culture demons are not taken seriously, but the New Testament takes demons very seriously.

One of Jesus’ ministries when he walked this earth was casting out demons. He actually presented his work of casting out demons as evidence that the kingdom of God had arrived. If demons were a fairy tale, Jesus would have exposed it. Instead, he spent much of his valuable time delivering people from their control. He took them seriously, and so should we. 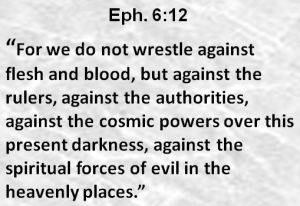 In fact, Paul told the Ephesians that in our Christian life our real battle is not with human enemies, but with these demons. We wrestle against the spiritual forces of evil. These forces are real, even though normally we can’t see them. They work in four ways: they tempt us to sin, they deceive us in our thinking, they accuse us in order to render us powerless through guilt, and (if all else fails) they intimidate us by manifesting. 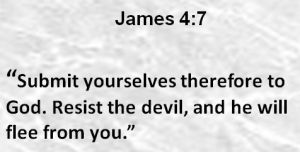 So Peter tells us to be on the watch, because just because you chose to ignore the spirit world does not mean that you cannot become a victim of it. Satan is real, and he is looking for his lunch. Peter says “be watchful.” Don’t become lion lunch.

So Paul continues his chronological argument by reminding the Galatians that when the gospel came, they accepted it gladly. Even though Paul had some kind of sickness when he came to their area, they still flocked to him. He had the answer to their problem. By trusting in Jesus Christ as their Saviour and Lord, these Galatians found freedom from their bondage to demons. They were set free. They found out that they did not have live in fear of these spirit beings anymore. That is good news.

So what happened? What turned these victors in to victims? It was pride. Yes, that’s right… pride. In verse 17, Paul says “They make much of you, but for no good purpose. They want to shut you out, that you may make much of them.” The “they” are the troublers, the Judaizers. They came to Galatia as “super-Christians.” They said to the Galatians “Hey, you overcame your bondage to demons. That’s good. But now it’s time for you take the next step. Become super-Christians like us.

But Paul knew what was really going on. He realised that the temptation to pride was coming from the same place that the demonic bondage had come from. The Galatians were being enticed to go forward when in fact they would really be going backward. 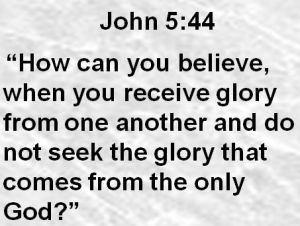 This was the very thing that kept many Jews from receiving the gospel in the first place. They wanted praise from others, and were not willing to humble themselves and put their trust in God alone.

But God chooses to save those who cannot say “I can handle this.” He chooses the low and despised in the world. There are no self-made men in the kingdom of God. 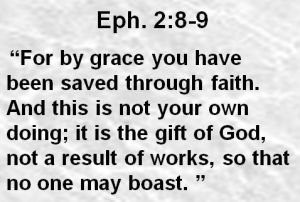 By grace. Through faith. Not your own doing.

This is why the message of Galatians is so important: Anyone who hears the gospel is at risk of abandoning it – while still remaining outwardly Christian. 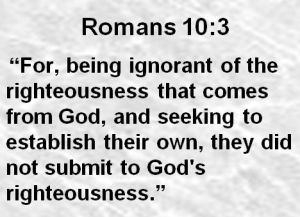 God has a righteousness available, but those who seek to establish their own will never submit to it. It is an either-or choice. God will not tolerate someone giving their life to him, and then taking it back.

So Paul told the Galatians to turn around because they had gotten turned around. They were going the wrong way. They had abandoned the gospel that they had received. In order to reach them for Christ, Paul had become like them. Now he was asking them to become like him: a person who lives by faith (12).

Paul had given birth to them by bringing them to Christ. Now he is in labour again so that the life of Christ can be formed in them (19).

John Piper describes that life this way: “Faith is the assurance that what God will make of you, as Christ is formed in your life, is vastly to be preferred over what you can make of yourself. Faith is the confidence that the demonstration of Christ’s work in your life is more wonderful than all the praise you could get for yourself by being a self-made man—or woman. Faith is a happy resting in the all-sufficiency of what Christ did on the cross, what he is doing now in our heart, and what he promises to do for us for ever.” 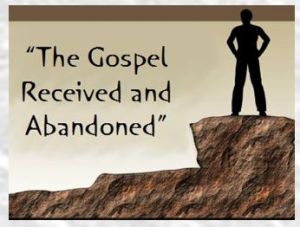 Now this message applies to us today. It is possible to remain in the church while abandoning the gospel. It is possible to escape one form of demonic deception and then fall for another form. The Galatians had abandoned their idols, but now they were tuning to pride and self-reliance.
———–
LORD, help us to live by faith in the Son of God who died for us. Help us to rest in the all-sufficiency of what Christ did for us on the cross, what he is doing now in our hearts, and what he promises to do for us for ever. In Jesus’ name, Amen.