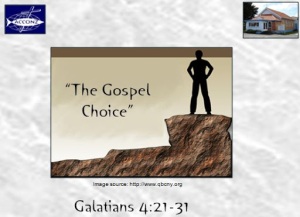 Galatians 4:21-31 Tell me, you who desire to be under the law, do you not listen to the law? 22 For it is written that Abraham had two sons, one by a slave woman and one by a free woman. 23 But the son of the slave was born according to the flesh, while the son of the free woman was born through promise. 24 Now this may be interpreted allegorically: these women are two covenants. One is from Mount Sinai, bearing children for slavery; she is Hagar. 25 Now Hagar is Mount Sinai in Arabia; she corresponds to the present Jerusalem, for she is in slavery with her children. 26 But the Jerusalem above is free, and she is our mother. 27 For it is written, “Rejoice, O barren one who does not bear; break forth and cry aloud, you who are not in labor! For the children of the desolate one will be more than those of the one who has a husband.” 28 Now you, brothers, like Isaac, are children of promise. 29 But just as at that time he who was born according to the flesh persecuted him who was born according to the Spirit, so also it is now. 30 But what does the Scripture say? “Cast out the slave woman and her son, for the son of the slave woman shall not inherit with the son of the free woman.” 31 So, brothers, we are not children of the slave but of the free woman. 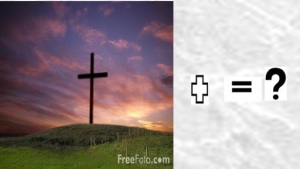 We have been meditating on Paul’s letter to the Galatians for the past few months. Paul was dealing with a problem that had developed not only in the Galatian region, but in many places where new Gentile churches had been established. A group of people from Jerusalem had infiltrated these Gentile churches and suggested an alternative to the Gospel of salvation by grace that Paul preached. Their alternative involved trusting in Jesus for their salvation, AND following the Jewish customs and traditions. 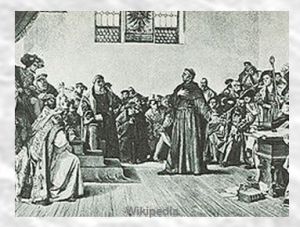 This problem was not unique to the first century AD. For two thousand years the Church of Jesus Christ has had to constantly re-evaluate and reform itself because human traditions keep crowding themselves into its doctrines and practices.
We have depended upon the Bible as God’s standard for what it means to be the Church. Each successive generation has had to re-look at the Bible to see if we have added some new human traditions and crowded out the simple truth of the gospel.

Fortunately today the Bible is not hidden from us. We no longer have to depend on professional clergy to tell us what the Bible says, or to interpret its message for us. Those of us who speak English have dozens of well-prepared Bible translations available for us to read. We even have access to the original languages in which the Bible was written. Nothing keeps us from getting a clear message from God, and responding to that message in faith.
Nothing, that is, except laziness or presuming that we already understand the Bible!

Today’s text offers us an opportunity not just to re-examine the Bible, but to re-examine ourselves, and the choice that we have made that puts us in this church building today. Paul was writing to people who claimed to be true Christians, but he argued that they had substituted the true faith that they had received for a false faith, a faith in both Christ and themselves.
As we examine Paul’s argument in Galatians 4:21-31, we need to be asking ourselves what choice we have made as well.

Here is the story that Paul was alluding to in today’s text. In Genesis 15 God had promised Abraham that he would be the father of many nations, but he was childless.
Genesis 16:2 And Sarai said to Abram, “Behold now, the LORD has prevented me from bearing children. Go in to my servant; it may be that I shall obtain children by her.” And Abram listened to the voice of Sarai.
Genesis 16:15 And Hagar bore Abram a son, and Abram called the name of his son, whom Hagar bore, Ishmael.

Now let us pick up the story 14 years later:
Genesis 17:15-19 And God said to Abraham, “As for Sarai your wife, you shall not call her name Sarai, but Sarah shall be her name. 16 I will bless her, and moreover, I will give you a son by her. I will bless her, and she shall become nations; kings of peoples shall come from her.” 17 Then Abraham fell on his face and laughed and said to himself, “Shall a child be born to a man who is a hundred years old? Shall Sarah, who is ninety years old, bear a child?” 18 And Abraham said to God, “Oh that Ishmael might live before you!” 19 God said, “No, but Sarah your wife shall bear you a son, and you shall call his name Isaac. I will establish my covenant with him as an everlasting covenant for his offspring after him.
It turns out that Abraham was wrong to go behind God’s back and do his miracle for him. I think this is the point that Paul is making: We are in danger of asking God to bless us with salvation, then taking the task back on ourselves.

God offers us something supernatural – something only he can do. He has an Isaac in store for us. We assess our situation, and, like Abraham and Sarah, we decide God needs a little help. After all, God helps those who help themselves, right?
Actually, that’s one of those statements that lots of people quote, but it is not in the Bible. The truth is, God can only help those who realize that they cannot help themselves. Having Ishmael was the wrong choice. It was, in biblical terms, “of the flesh.”

Having introduced faith to the Gentile Galatians, he also introduced to them the power that would enable them to live out their salvation. Paul asks them in Gal. 3:3 “Having begun by the Spirit, are you now being perfected by the flesh?” And that is exactly what the Judaisers wanted. They wanted to replace the Holy Spirit with the Mosaic Law as the means of sanctification.
But it doesn’t work that way. Paul says in Galatians 3:21-22 “… if a law had been given that could give life, then righteousness would indeed be by the law. But the Scripture imprisoned everything under sin, so that the promise by faith in Jesus Christ might be given to those who believe.” 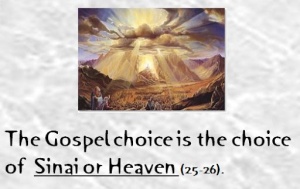 Paul asks the Galatians to think of two places: Mt. Sinai in Arabia or the heavenly Jerusalem. He is trying to get them to see for themselves that only one choice leads to true freedom.

The people at Sinai had the same choice.

They should have said, “We cannot follow the rules, we put ourselves at your mercy and trust in your grace.”

So Paul quotes Genesis 21:10 where God orders Abraham to expel Hagar because Ishmael will not share in Isaac’s inheritance. Hagar is called “the slave woman.”
Paul has been using this allegory to point out that the Galatians have a simple choice. If they want to inherit the blessings of Abraham they will have to make the choice Abraham did. They have to take God on his terms, not their terms.

Now, you and I have to make the same choice. We can decide to do our best, and hope that God accepts it. That is the choice of Hagar, of Ishmael, of the letter, of Sinai, it is a choice to enslave ourselves.
Or, we can take God on his terms. We can say, God, I cannot do it myself. I trust in Christ and his finished work on the cross. I trust in your Holy Spirit to guide me in the Christian walk. And I trust in You, heavenly Father, to bring me into the inheritance you have planned for me.